The History of Waspy’s Truck Stop

Many may not know, but Waspy’s Truck Stop has an abundance of history behind its name. This is what makes Waspy’s such a unique, personable experience for each of our customers. Not only does the name have unique significance, but Waspy’s is a family owned and operated business, which plays a huge part in the backstory behind the truck stop. Due to the history of Waspy’s Truck Stop, Waspy’s will always remain a staple, locally owned business in the Templeton, Iowa community.

The Story of Waspy’s Truck Stop

Today, Waspy’s Truck Stop proudly stands on a full 10 acres at the corner of Country Road and N-18., located at 703 S. Rye Avenue, Iowa 51463. Local Audubon area-farmer Lawrence “Waspy” Handlos and his wife, Doris, remain the sole owners of Waspy’s Truck Stop while Brian Handlos, Lawrence and Doris’s son, developed the truck stop. Considering the success and great feedback received about the Templeton, IA location, plans for a second location in Audubon, IA is in the making. This second location will be located on the south side of the city, just west of the airport. Just recently, Waspy’s Truck Stop has announced that they will officially open the doors to the Audubon, IA on August 1, 2018.

So what is the background story about the name, “Waspy’s Truck Stop”? As you can probably guess by now, the name “Waspy” is Lawrence Handlos’s nickname that he has had since he was just a kid. His father, a German immigrant who settled in the Carroll, Iowa area, gave Lawrence this nickname as a child. The reason behind the name “Waspy” is because it is tied to another German name that his father was very fond of, “Sebastian”. Now Lawrence, who has turned 80 years old, still carries the nickname of “Waspy” with him and is proud that a name with such history could be turned into a local business that will remain in the family. 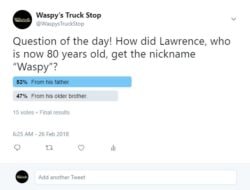 Did you know the story behind the name of “Waspy’s Truck Stop”? We recently took a Twitter poll on the Waspy’s Twitter account, @WaspysTruckStop, asking our followers if they knew how Lawrence got the said nickname. We had two answers for them to choose between his father or his older brother. The poll ran for 24 hours and these were the results:

Out of the 15 participants, 53% of them answered “from his father”, while 47% answered, “from his older brother”. If you want to stay up to date with the latest Waspy’s news and participate in fun activities such as our most recent poll about the history of Waspy’s, follow us on Twitter @WaspysTruckStop!